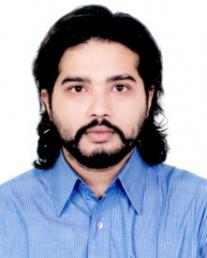 Ahmed Tahsin Shams, born in Dhaka, completed his B.A and M.A from the Department of English, University of Dhaka. He did his schooling from prestigious academic grounds — St. Joseph Higher Secondary School and Notre Dame College.
Besides being a Lecturer at the Department of English in Notre Dame University Bangladesh, Shams simultaneously works with The Daily Observer as Sub-editor of two literary pages — Literature and Book Review (Weekend Observer). He is also working with fortnightly journal titled Bangladesh Monitor as Feature Editor. Shams works with Channel-i as English Subtitle Translator (International Film Desk, Impress Telefilm Ltd.)
As Shams did his major in English Literature, he is efficiently indulged into creative writing and critical literary & cultural theories. He is the author of the books Theo 101, a collection of poems published by Antivirus Publication (Liverpool, England) in 2015, Cultural Columns: Traffic of Truth published by Utso Prokashan (Bangladesh) in 2015. His books are reviewed in many national dailies, for instance — The Daily Star, The Daily Observer, Daily Sun, Dhaka Courier and so on. In addition, he has been interviewed for his visual-fictions and write-ups by the daily Aajkal (Kolkata, India).
At present, Shams has framed an audio-visual feature film titled A Tale of Night-Flowers, shorts titled ‘Pigland’, and ‘No More Tales…’ Shams wrote numerous television fiction scripts in Bangladesh, and directed telefilm Shunner Abritti (The Sound of Silence), aired on Channel-i, produced a visual fiction Pracheer, aired on ATN Bangla. Moreover, he is the script writer of visual fiction titled Bodhon, aired on Bangladesh Television and Andore Alo, aired on SATV. Shams is also the co-writer of an Indian visual fiction Female in Frame (Kolkata, India). Presently, he is involved into an academic book project of Antivirus Publication (Liverpool, England) titled Read before You Write, as well as a poesy-prose-memoirs titled Anecdotes. He is also writing for two Indian journals of English literature – Ashvamegh, and The Nilgiri Wagon.